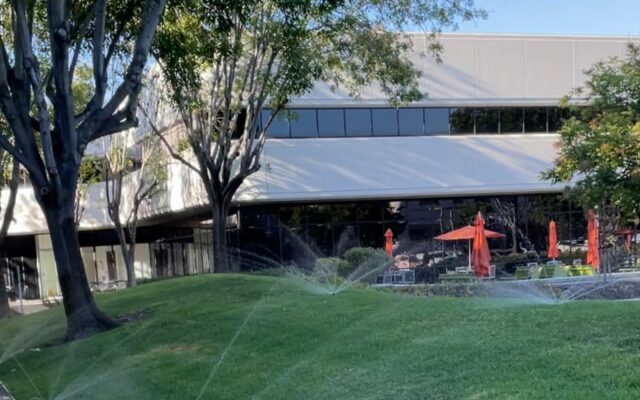 Santa Clara County is getting serious about Water Conservation.

According to KRON4, the Santa Clara Board of Directors voted to ban watering decorative lawns.

Those specifically on commercial properties, industrial sites, and at institutions.

But the ban doesn’t restrict all watering.

Starting Wednesday, “ornamental” lawns can only be watered 2 days per week, and only between 6pm and 9am.

And, obviously, they can’t water within 48 hours of rainfall.

The Valley Water Board of Directors will consider every option available to help protect our county’s water supply… We must all work together so we can protect our current and future water supply.

If any business or institution violates the ban, they could face pretty extreme fines, upwards of $10,000.

The move comes after one of the driest winters on record, and one of the warmest summers, to boot.

Governor Newsom and other state leaders met in June 2022 to discuss the dry conditions.

Many of the states current water reservoirs are about half as full as they usually are.

To help with the situation, the governor is considering proposing significant water restrictions.

These could range anywhere from education to fines.

From the governor’s press release:

Californians made significant changes since the last drought but we have seen an uptick in water use, especially as we enter the summer months. We all have to be more thoughtful about how to make every drop count.

Who’s wasting the most water?

According to a 2015 study by the PPIC Water Policy Center, individual water use in dry years accounts for approximately 11% of overall use.

28% can be attributed to Environmental use (such as maintaining rivers, wetlands, Delta overflow, and instream flows).

But a whopping 61% is being used by agriculture.

On top of that, FoodAndWaterWatch.org notes that nearly 20% of agribusiness water use goes towards cultivating tree nuts.