Bay Area traffic is always in a jam.

No matter the time of day, you’ll always find yourself struggling to ketchup.

According to KRON4, drivers in the North Bay were forced to mash on their breaks Monday morning.

They needed to drive pasta massive tomato spill on the highway.

The incident happened on I-80 year Vacaville.

Tossing their delicious cargo across both sides of the highway.

While bystanders admitted the smell was delicious, it meant many drivers had to roma slowly past the scene.

And northbound from Alamo Drive to Cherry Glenn Road.

UPDATE: Eastbound lanes of I-80 in Vacaville have been cleared, but part of the tomato truck that crashed and spilled its load earlier remains in the westbound left lane waiting to be towed from the scene. https://t.co/0yAX3VkJ8L pic.twitter.com/oqAiaNbQLm

While the crash appeared to have happened relatively early in the morning, it took work crews until 11:30am to clear the scene.

And even now, drivers and residents alike say the smell lingers.

It wouldn’t be too surprising if it’s weeks before it becomes fully clear.

If you’ve ever driven through Gilroy, you know, it’s a scent you can taste from your head to-ma-toes.

(Okay. That’s enough puns for today. we’ll pick that back up Tomarzano)

One Monday afternoon in 2019, things were down to a standstill…

And it turns out, there was a bizarre reason behind it.

According to KTVU, the major backup in Hayward wasn’t because of an accident.

Or even just too many people on the road.

It was because drivers were stopping, getting out of their cars…

Apparently, the money belonged to a family who lived near the highway.

They were driving back from a funeral…

And began throwing wads of $20 bills out their car window to honor their deceased relative.

It still caused quite the stir on the road.

Drivers must have thought Mother Nature was giving them a hand. 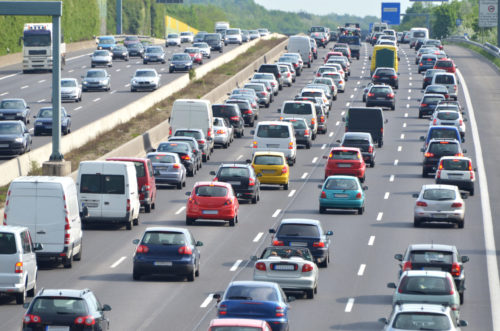