Visiting NorCal’s tallest trees could net you a hefty fine 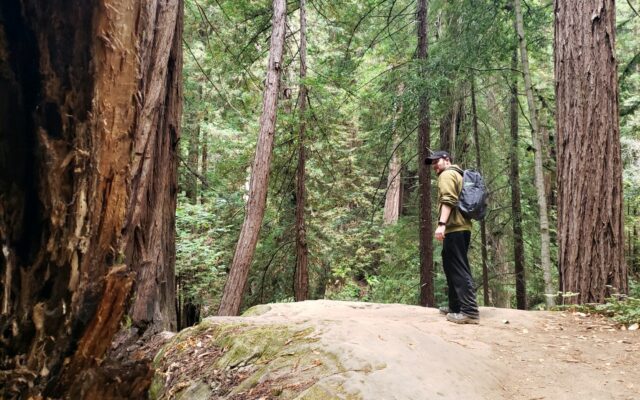 Big Basin is California's oldest State Park, with some of the biggest trees. It's also one of 3G's favorite hiking spots.

California redwoods are some of the biggest trees in the world.

Hyperion, the biggest of the bunch, could give you some sweet pictures.

Unfortunately, it could also land you in some pretty hot water.

“Hyperion is located off trail through dense vegetation and requires heavy ‘bushwhacking’ in order to reach the tree. Despite the difficult journey, increased popularity due to bloggers, travel writers, and websites of this off-trail tree has resulted in the devastation of the habitat surrounding Hyperion.”

Just how off-trail is Hyperion? Significantly.

The Sequoia sits in a particularly difficult place for hikers.

There’s no cell coverage, no GPS, and it’s far enough away from civilization that it will be difficult, if not impossible, to get medical attention in an emergency.

Something particularly dangerous for inexperienced hikers.

The effects from excursions by hikers, bloggers, and the “insta-famous” are pretty clear.

And whether or not that devastation was intentional, it could have pretty lasting impacts.

“Forests grow by the inch and die by the foot.”

If you’re more ecologically minded, you might question the Parks Service’s logic.

You’re only one person. Surely you wouldn’t cause that much damage.

“A single visitor can make a drastic negative change to an environment. Although you may feel like you are not making an impact, many people making a small change creates a lasting and devastating effect.”

And that will damage more than just the environment.

If you’re caught anywhere near Hyperion, off trail, you could face as much as a $5000 fine and 6 months in jail.

“As a visitor, you must decide if you will be part of the preservation of this unique landscape – or will you be part of its destruction?”

Elsewhere in Northern California, signs of life are starting to bloom.

While the park has made great strides in regeneration, there’s still a lot of work to be done.

“All the structures had to removed, burned out vehicles, toxic soils and lots and lots of hazard trees had to come down. So, it’s a very different landscape from what it was, but 30 of the trees are coming back remarkably well.”

The remaining trees and foliage are showing remarkable resilience.

Leaves are re-sprouting on trees.

Grass, mosses, bugs, and flowers are beginning to grow back.

The Long Road To Recovery For Big Basin

Big Basin is the oldest State Park in California, having been established in 1902.

Some of the redwoods are also some of the eldest in the state.

The devastating CZU Fire burned through an estimated 97% of the structures and park.

Thankfully, many of the old growth trees survived the fire.

But they’re not out of the woods yet.

“I think it’s pretty obvious that a warming and trying climate has exacerbated the intensity and rate of when these fires are happening… To see a fire of this intensity coming through this landscape, which is typically moist, which is typically drippy with fog in August, things are changing.”